About 100 km east – a two hour drive – from Phu Suan Sai National Park in Loei province, and about an hour west – 50-60 km depending on the route – from Loei’s provincial capital is Phu Luang Wildlife Sanctuary, which houses Loei’s tallest mountain at a little under 1600 metres and is well-known for both its healthy elephant population, as well as a well-preserved set of bipedal dinosaur footprints located on the mountain’s grassy plateau. However, given its variety of habitats that include evergreen forest, grasslands, stands of rhododendrons and remnants of pine forest, Phu Luang WS holds an impressive number of bird species, including an endemic subspecies of Black-throated Parrotball known as Black-eared Parrotbill owing to its plumage differences. An important to note, that the sanctuary is closed past the headquarter during the wet season (June-September), but on one of my visits to Loei during this time, the rangers at the HQ still allowed me to walk along the road to do some birding. 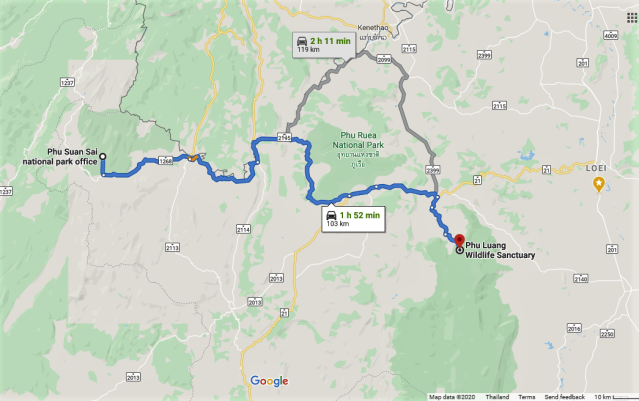 When following Google Maps to Phu Luang WS, it’s important to know that Google Maps has two locations for the wildlife sanctuary. From experience, however, I can say that only the site at the coordinates (17.362338, 101.505723) are accessible, and the site further east (closer to Loei town, hence my attempt to get there) lead to a dead end near a temple. Nonetheless, the scenery near this more easterly point and spectacular, as you a positioned under the steep eastern cliffs of the Phu Luang massif, but access to the summit can only be had through the northern entrance at the above coordinates.

On the left-hand satellite map above, there are six blue flags; the top flag represents the park’s headquarters which is also where one must stop to pay the entrance fee, which I believe is 200B for foreigners – I’ve only actually paid once. The bottom five blue flags represent the various landmarks and accommodation at the summit. On the right-hand satellite, the names on each of the flags can be seen, with the flag at the farthest left being where the accommodation and toilets are located.

On the right-hand satellite map, the locations at the summit are a little clearer, and while the main trail that leads past the old TV station and Pha Changparn can be clearly seen, there a a couple of very short trails that head west from the accommodation blocks at the summit towards the western cliffs. As of April 2020, I’ve yet to stay in the accommodation here, but hopefully I’ll have a chance soon. Another important thing to note is that it is forbidden to walk the main trail without a ranger accompanying you, but the service is free. However, they will try to wait until there is at least small group to escort along the trail. That said, the first several hundred metres of the main trail are the most birdy – and is where the parrotbills are usually seen – and the rangers seem to be okay with letting birders walk this section alone as long as they don’t go beyond the Pha Changparn. 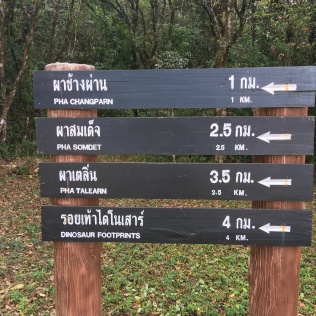 Direction and distances along the main summit trail

The first kilometre that runs from the summit – past the old Channel 7 station – and to Pha Changparn (the 1st cliff) is one of the most productive birding areas of the summit, and – as mentioned above – is where the parrotbills are often seen. On a couple of my visits here I have had several small bird waves come through that have included the likes of Streaked Wren-babbler, Golden Babbler, Red-billed Scimitar Babbler and Mountain Tailorbird, while I’ve also had Large Niltava, Slaty-backed Flycatcher and Orange-bellied Leafbird. This stretch of the trail is also where I have been allowed to walk alone, but that was still after asking the rangers. The following few pictures show this section of the trail.

The start of the summit trail 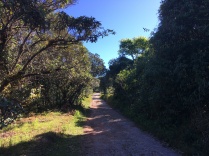 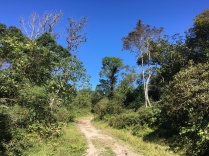 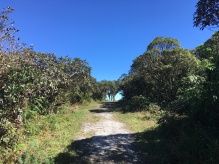 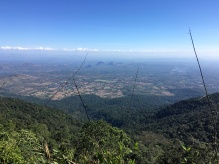 The view from Pha Changparn

There are plenty of orchids, rhododendron and other flowering plants along the trail.

The next several kilometres of trail that lead to Pha Talearn and the dinosaur footprints lead through several forest types, including small sections of pine, short rhododendron stands, and some grasslands, as well as a few areas of more evergreen forest that is found across the mountain. On the occasions I’ve walked this section, I’ve never seen too many species, but Flavescent Bulbul seems common, and Hill Prinia can also be found., and I’ve also had Blue-bearded Bee-eater along here. More time exploring this area – which can be seen in the pics below – would surely turn up some more good species, but as far as I know, this must be walked with a ranger. 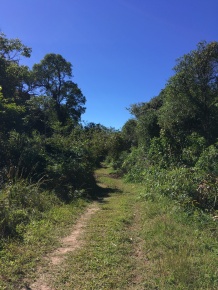 The trail after Pha Changparn

A small bog after Pha Changparn

More flora along the trail

Once one gets to the area around Pha Talearn, the forest gives way to stone covered grassy fields, and I’ve only been to this area once, and didn’t spend a whole lot of time here. The views hear are spectacular, as you look over the north-eastern edge of the plateau, an area where Sumatran Serow are occasionally seen. The birds of note I’ve seen here are Siberian Stonechat and Dusky Crag-Martin. The highlight, however, is the set of well-preserved dinosaur footprints, but finding them without a ranger would require dumb luck! 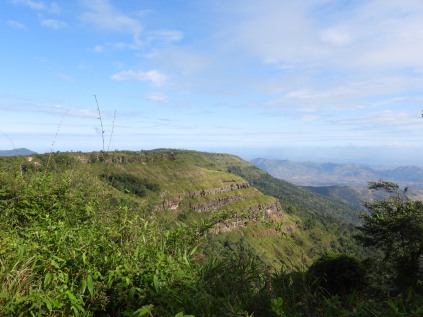 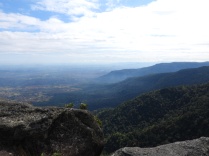 The view from Pha Talearn

The view from Pha Talearn

Our ranger escort at Pha Talearn

DInosaur footprint next to my wife’s foot for size reference

The last area of the summit is the area around the accommodation and toilet blocks, with its few smaller trails. I’ve not really explored this area too well, but good birds are undoubtedly around, and it was along the road at the summit, just before reaching the accommodation area that I’ve seen Silver Pheasant. Other birds I’ve encountered here include Blue Whistling-thrush, Red Junglefowl, Olive-backed Pipit, Chestnut-flanked White-eye, Blue-winged Minla and both Flavescent and Mountain Bulbul. 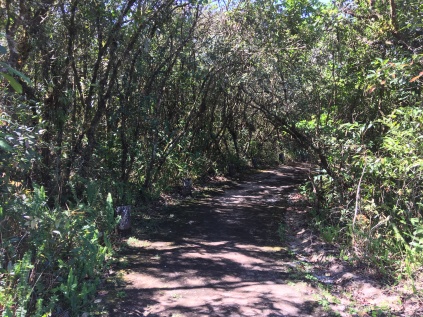 One of the small summit trails 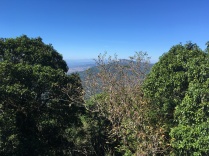 Looking west from one of the small viewpoints at the summit

My fourth visit to Phu Luang was also my first birding expedition of the 2020, and my wife and I were greeted with a pleasant surprise when neither of us had to pay the entrance fee – it had been announced that all parks were free for Thais over the New Year period, but it was a kind gesture that this was also extended to me.

After signing is – something that must be done every time – we headed straight up to the summit, and it was just as we were crested the final rise that we came across a pair of Silver Pheasants foraging on the roadside with a single Red Junglefowl – my first new bird on the the first day of the new year! However, once we’d parked the car, and hopped out, we realized how cold it was at the top – colder than I’ve previously experienced, and this was amplified by extremely strong wings, and intermittent fine, misty rain. Nonetheless, we found a ranger who would walk with us along the first kilometre of the trail – there had been a lot of elephant activity, so he wouldn’t let us go alone – but given the very windy conditions, there was very little birding activity.

I then explored the smaller summit trails for a bit, and we stopped further down the mountain at one of the ranger stations where the wind had no effect, and in doing so added a few more birds to my daily tally, but overall, and despite the pheasants, the blustery conditions at the summit made for a somewhat underwhelming visit. >checklist

After my first brief visit to the summit earlier in the month, I really wanted to get back and explore, and with the near-annual New Year visit to my parents-in-law, the opportunity came quickly. My wife had never been to the summit of Phu Luang either, so she was keen to come along, and we both made it our goal to find the dinosaur footprints.

Once at the top, we parked next to the old Channel 7 station and set off along the main trail. There were quite a few good birds along here, including Streaked Wren-babbler, Blue-winged Minla, Orange-bellied Leafbird and Large Niltava. After a short stop at Pha Changparn for a rest and photos, we continued along the trail towards the footprints, and Hill Prinia, Flavescent Bulbul and Blue-bearded Bee-eater were all seen. But it was also just as we were at another viewpoint that a small band of park rangers came upon us, and were very surprised to see us alone – it was at this point that we found out we were not supposed to be along here without a ranger escort. However, they were extremely friendly, and offered for us to come along with them for the rest of the rounds, and also show us the dinosaur footprints.

And it was very lucky that the rangers found us, as without them, we would have never found the footprints – they are on a small section of rock, surrounded by tall grass, with no signage at all. Anyway, after seeing the footprints, the rangers took us down a trail through moist evergreen forest – when my screaming wife met a leech – and down to the road, several kilometres from the summit, after which they drove us back to the top.

I then asked one of the ranger if it would be possible to walk the first part of the trail alone to look for birds, and he said that would be fine, so I spend the next hour doing so, turning up some more good birds, the highlight being a female Slaty-backed Flycatcher. –> checklist

After our hiking trips to Phu Suan Sai and Phu Soi Dao National Parks, my friends and I decided to spend a morning at Phu Luang WS before heading back to Loei town and then Bangkok. Having never been to the summit, I had no expectations, but I was quite surprised to see the habitat at the top of Phu Luang was quite different to the habitats we’d just experienced on the other two mountains, with rhododendrons being ubiquitous here.

We didn’t really know where to go, so we just walked along the summit trail, and immediately came upon a bird wave of small birds flitting through the lower canopy, with species such as Streaked Wren-babbler, Yunnan Fulvetta, Blue-winged Minla, several species of white-eye and Mountain Tailorbird being the most evident, but a very skulking Red-billed Scimitar-babbler also popped out from cover once.  We continued on the Pha Changlearn, and then walked a little further along the trail before we decided to head back to the car and then onto the comfort of our hotel in Loei. –> checklist

Having not realised that the road up to the summit was closed during this time of the year, upon my arrival at the park’s HQ, I was unfortunately told I wouldn’t be able to drive up. The friendly staff, however, did let me walk along the road, as long as I didn’t go too far – a couple of kilometres they said – and they of course did not charge me the entrance fee to do so. And while the light rain and overcast conditions didn’t help with visibility into the understory or canopy while walking along the road – and into the forest along a couple of game trails, some good birds were still seen, including Lesser Racket-tailed Drongo, Blyth’s Paradise-flycatcher, Rufescent Prinia and Buff-breasted Babbler. –> checklist